The Curatron FLASH is very different and generates a series of very short electromotive pulses. The pulses momentarily excite the cells and muscles in our bodies. In fact, as one increases the output pulse energy or voltage then we can, and do, in fact, feel each pulse. Our standard Curatron family.

First, an analogy for those of us less technically inclined or perhaps those of us needing a refresher. Modern flash photography uses very similar technology to cause a flash tube to create a burst of light, that we call a flash. Strobe lights are closer to our FLASH technology than one might think. There are two basic parts to a strobe or flash. One is a device called a capacitor that can store energy. Imagine a capacitor to be a bucket on a table. Start pouring water into that bucket (or electrons into a capacitor) and at some point the capacitor or bucket is full. In both cases, we have stored energy.

The second important piece is the switch or control that can tip the bucket, releasing stored energy or perhaps connect the capacitor to flash tube to cause that burst of light.

In the case of the Curatron FLASH, the energy stored in that capacitor is dumped into the applicator that we place on our bodies to gain the effect of the high power energy pulse.

This switch is the key difference between the archaic spark gap ringer systems and the FLASH. The FLASH switch can be timed digitally and controlled perfectly. The spark gap systems “fire when ready” and as the electrodes erode over time so does the accuracy of the pulse. Spark gap systems fire a pulse when the charge on the capacitor reaches a voltage that causes a spark between the electrodes. The circuitry has no control as to when this will occur as it’s dependent on atmospheric pressure and humidity of the air in the gap. With FLASH technology, the circuitry charges the capacitor. The capacitor maintains the charge and the electronic switch dumps the charge into the applicator coil under computer control. This is the reason that the built-in programs and the programs in the optional software can be set to operate at any preset frequency. (See the chart at the bottom of this page and the charts on the software programming pages. 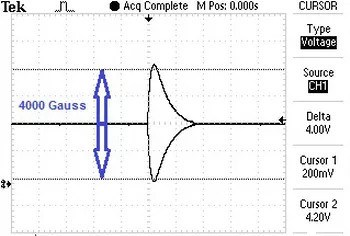 This picture shows an electromagnetic pulse measurement, with a laser calibrated Hall sensor. The actual waveform looks quite different and we’ll have an image shortly for you. The maximum intensity of the PEMF pulse generated by the Curatron Flash device into the coil 4000 Gauss.

The maximum intensity of the PEMF pulse generated by the Curatron Flash device into the coil 4000 Gauss.

There are ten built-in programs in the Curatron FLASH The 10 built-in computer controlled programs, as shown in this table, offer superior flexibility including for use as a so-called ringer and oscillating PEMF applications.

The 10 built-in computer controlled programs of the Curatron FLASH offer superior flexibility for PEMF therapy applications.
​
The tables below show the program data and PEMF values for the large applicator coil reaching 4,000 Gauss. The lower the pulsing frequency, the higher the PEMF intensity will be because the time it takes to charge the capacitor becomes longer between each pulse. The more time for charging the capacitor to a higher voltage between each pulse the higher the amount of energy stored in the capacitor and hence the more powerful the pulsing electromagnetic field will be when this energy is suddenly released into the coil.
When the Power Booster is activated Gauss intensity values are boosted by > 30% up to 5,400 Gauss and 7000 Gauss with the booster with the 7″ Pad.

Join our mailing list to receive the latest news and updates from our team. We don't send lots of SPAM. We hate SPAM as much as you!

You have Successfully Subscribed!

We promise! No SPAM!

Click on any of the four tables below to see the details.

Booster On with 7" pad, We deliver 7000 Gauss. That's double our competitor's.

You have Successfully Subscribed!

We hate SPAM as well!